In the martial art of Muay Thai, there is a distinction between three combat distances. These 3 are the distance fight, the half distance and the Infight. Each distance has their own techniques, which are preferably used.

Muay Thai techniques in the half-distance:

The Muay Thai techniques in detail: 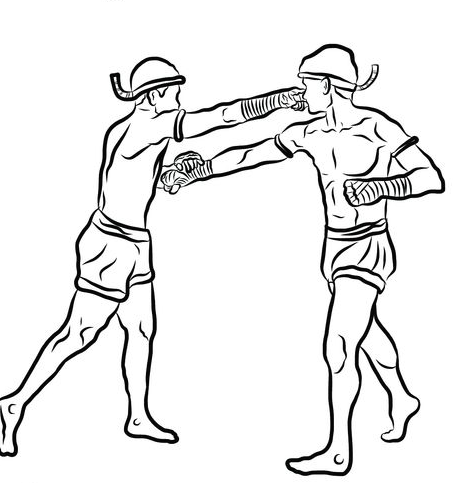 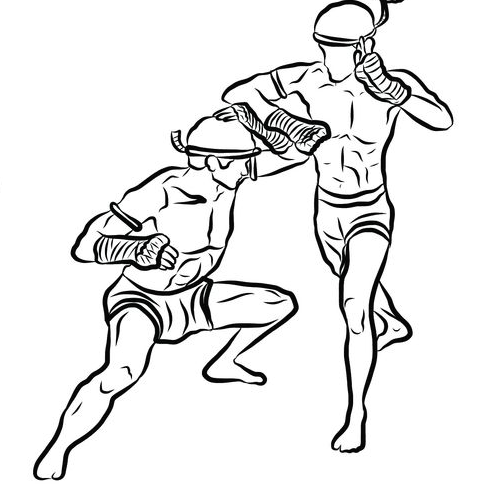 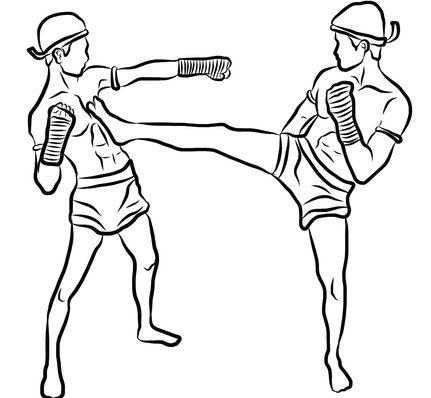 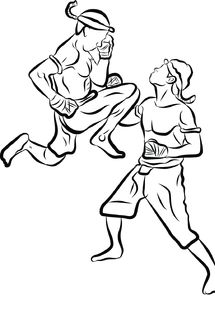 Ringer techniques in the stance. Here, the opponent is taken in the clinch and weakened in conjunction with knee joints and elbow strikes. On the ground, the fight is stopped. 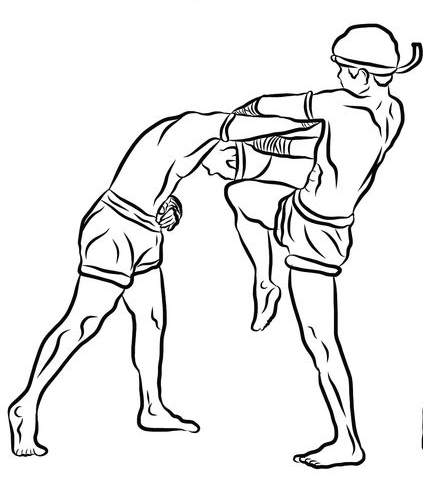 No other combat sport in the world is kneeing so efficiently and is using knee techniques as many as in a Muay Thai fight. The knee techniques are extremely hard blows and can weaken the opponent enormous. The key objective is always the upper body or the thigh of the opponent. But shocks to the head are allowed and can cause an immediately Knock Out.

The knee techniques are roughly divided into those with and without clinching. Knee shots without clinch take place at medium distance and can also be combined with a jump. In this way can succeed hard hits to the head.

But the most knee attacks will be done in the clinch. If the opponent is caught in a tight clinch, he can not get out of this situation. Then he is an optimal target for Muay Thai knee attacks against legs and upper body.

Here are all Muay Thai Knee Moves in detail:

2. Kao Dode (Jumping knee) is done when to boxer springs up, thrusting the knee towards the target. This is similar to the straight knee throw. The difference being did with this technique, the boxer jumps a little bit to add to the momentum of the thrust.

3. Kao Noi (Small knee) is used to counter when the opponent thrust a knee throw or is about to lift his leg for a knee or throw a kick.

4. Kao Kratai (Rabbit knee) is used When The boxers are clinching either in the corner or the middle of the ring so as to drain strength from the opponent’s legs.

5. Kao La (Farewell knee) is used right after the clinch. If you want to disengage yourself from the clinch, you just thrust a knee into keeping it parallel to the floor.

6. Kao Lod (Lower knee) is used whenyour straight knee thrust missed the target. Instead of spoiling your tempo altogether, you shoulderstand lower the thrust to preempt the opponent from Countering. This is a good ploy to use to exhaust him.

7. Kao Loi (Flying knee) is a very powerful knee thrust, if the user does it properly and well. The opponent can be finished off Quickly When Kao Loi hits the target. 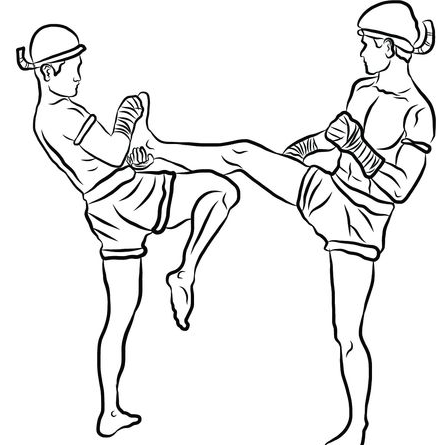 The leg moves and strikes in Muay Thai are fundamentally different from those of most other sports. The leg techniques of Muay Thai are so called “piercing through” kicks. This means that the kicks are executed like the opponent will be pierced by the kick. The whole strength and force of the body is used. Many other martial arts use only the force of the leg.

An effective training of foot techniques takes place at the thai pads or the heavy bag. There, the kicks can be executed with full force. Here, the fighters always put their entire body weight into the devastating blow.

The most effective kick in Muay Thai is definitely the one against the legs of the opponent. The so-called lowkick is very hard to defend against because of its short way. Blows to the head are allowed, but much more difficult to perform, since care must be taken to cover the own head and body during the head kick. While jumping and spinning back kicks the executive fighter is very vulnerable against counterattacks. Therefore, these spectacular techniques are seen rare in competitions.

The fist techniques are extremely effective in Muay Thai and are used quite often. However, the fighter must always cover himself to protect the chin against counter attacks. Also backfist strikes from the rotation are allowed in Muay Thai and continually provide spectacular fights and Knock Outs.

The elbow techniques play a particularly large role in Muay Thai. Hardly any other martial art has so effectively perfected the elbow as a weapon. Elbow techniques are usually performed in the near striking distance and in the clinch. A good hit on the head often leads to an instant KO. The face, the neck and the upper body of the opponent will be targeted specifically.

This is one of the main reasons why many boxers devote a lot of training time for strict coverage and defense of elbow strikes. By elbow techniques, also physically inferior people can perform extremely tough and effective blows to a much stronger opponent. Consequently, they are among the most dangerous weapons of Muay Thai in the competition as well as in self-defense.

In Muay Thai, there are 8 basic elbow techniques:

What looks usually less stressful for outsiders, is extremely exhausting for the fighters. Clinching is the hardest and most exhausting thing there is to cope in a competition. So good fighters use countless clinch techniques to redirect the opponent’s force and to attack him with effective knee and elbow strikes. Help from the referee can not to be expected. Where the referee stops the fight in other martial arts, the bout just begins in Muay Thai!

Precisely this is the reason why many good boxers devote intensive training their clinch techniques. Who masters the countless movements perfectly, can take a big advantage even against much stronger opponents. The perfect clinching technique is everything. Highly desirable is the Clinch handle from the inner position. So the opponent can be optimally controlled and the balance can be broken much easier. It is also easier to land knee techniques reliable in the target.

You can download the free Mongkon Magazine Special Issue here 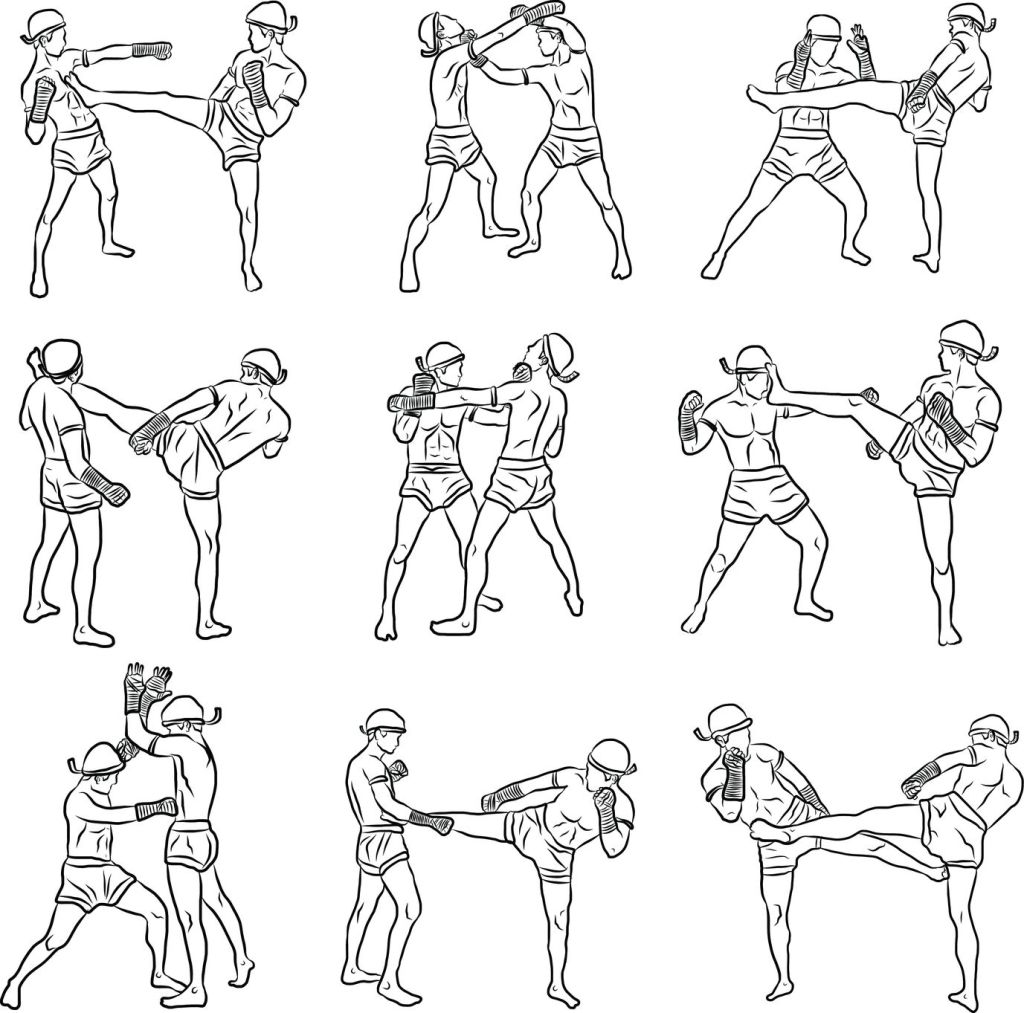