Many Muay Thai fighters wear magic Sak Yant tattoos. But these are by far not only decoration rather they are said to have magical powers that protect the carrier of the symbols. Even in the “normal” population Sak Yant tattoos are extremely popular. Muay Thai World presents you the magical tattoos in detail.

The importance of Sak Yant Tattoos in Thailand

Sak Yant Tattoos are originally Buddhist tattoos that should be pierced only by monks. Only in this way they can develop their magical effect as desired. As part of the tattooing process a Buddhist ceremony is even part of it.

Sak Yant Tattoos are engraved in the traditional way with a needle attached to a bamboo tube. This takes compared to modern tattoo machines much longer and is more painful. The ink often contains magical ingredients such as the ashes of a deceased monk is mixed with other magical substances.

If a Sak Yant tattoo is not made ​​in the traditional manner of a monk with a bamboo stick, the tattoo can not achieve the magical effect, for which it is intended. So this would be for example safety, happiness, success, and many other desirable properties.

Many Muay Thai fighters wear these tattoos just because of the protective effect.

The ritual of Sak Yant tattoos

The process of tattooing Sak Yant tattoos is also called as “Bidhi sak” (พิธี สัก). The tattoo master stings the symbol with the traditional “Mai Sak” (bamboo stick) under the skin. In addition to Buddhist monks are traditional healers or other religious specialists capable to equip tattoos with magical powers.

As ink they usually use thick Chinese ink, which is fortified with other magical ingredients. By reciting spells during the tattooing process the magical protection effects of the Sak Yant tattoos are sworn to the carrier of the symbols.

After the actual stinging process the Sak Yant tattoo needs to be consecrated. This is done by hits on the sore spot by the tattoo master or sprinkling with holy liquid. Just after this step the Sak Yant can ultimately develop its full protection to the wearer.

One of the most famous temple for stabbing Sak Yant tattoos in Thailand is the Wat Bang Phra near Bangkok.

One of the most famous Sak Yant Thai-tattoos is the Hah Taew tattoo.
Each of the five lines has its own magic and sacred significance. Typically, they give the wearer protection against evil spirits, happiness and success. 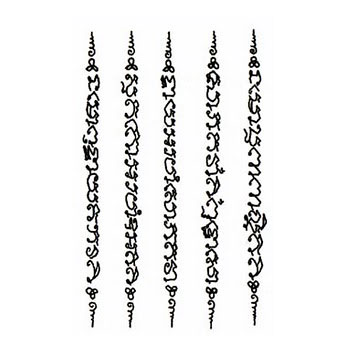 The Gao Yord tattoo is usually tattooed on the neck. The geometric design embodies the nine sacred peaks of Mount Meru and also includes Buddha symbols.

The wearer of a Gao Yang Yord Sak is protected from evil spirits and experiencing happiness in life. 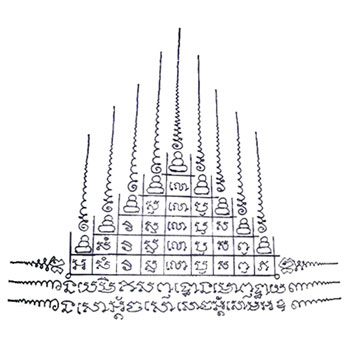 Muay Thai Tiger Tattoo:
The tiger is a symbol of power and strength . In addition, he is considered fearless. Precisely this are the reasons why this tattoo is very popular especially among Muay Thai fighters. 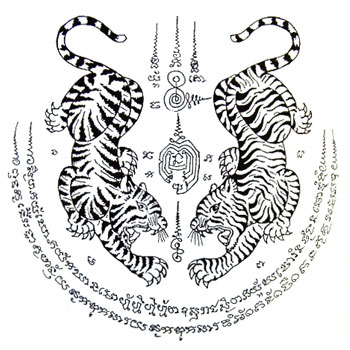 One of the most popular Muay Thai tattoos is that of Hanuman.
This is the Hindu god of the monkeys and the bearer of this tattoo is blessed with courage and bravery.

Hanuman is worshiped by many people as a symbol of strength, perseverance and devotion.

Ganesha is a Hindu God who enjoys great popularity in Thailand. It is said that he has the ability to clear the way of obstacles. On the other hand, he is also able to place obstacles in the way of man who not pay homage to him. In addition, he is regarded as god of dance and as a good lover and is worn by many people as a symbol of protection.
The World of Sak Yant tattoos is extremely complex and difficult for outsiders. Here we only explain the best known symbols. Many other magical motifs are known to the monks in the temples of Southeast Asia.

Credits: A look at the variety of tattoos you can see at Tiger, and two local tattoo studios where guests can get inked. ‘Bamboo Tattoo’ and ‘Protection Tattoo’. Also featuring an in depth look at traditional Thai tattoos with Tiger’s Muay Boran & Krabi Krabong instructor Kru Oh.