Muay Thai breathing: Breathing is an important life process. In order to provide the body with optimal oxygen is the proper breathing technique especially important in sports. Find out all about the breathing in Muay Thai and Martial Arts. 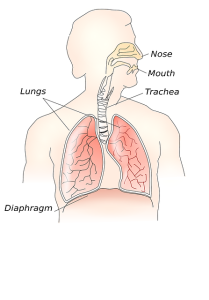 When breathing air flows through the mouth or nose into the lungs. The air is cleaned by tiny hairs in the nose first and humidified and warmed by the mucous membranes. By the alveoli, the oxygen is finally absorbed into the blood circulation. The other way round the carbon dioxide is also released through the alveoli of from the blood into the air.

By the respiratory muscles, and organs are thus supplied with oxygenated blood. This is the reason why the body can remain fully efficient. So the proper breathing plays a crucial role especially in the martial arts.

Breathing is controlled automatically. This is done automatically in the brain or respiratory center of the medulla oblongata. This chemoreceptors respond to the carbon dioxide content of the blood and are responsible for the respiratory charm.

Nevertheless, the breathing can be controlled consciously. Athletes make this often to use. But even in meditation, controlled breathing lead to inner peace and highest concentration.

Through proper breathing you can reach positive effects for the organs and the circulation in everyday life. Thus, the internal organs “massaged” by constantly breathing in and out. The heart benefits from deep breathing and is extremely relieved. So it is with deep breathing pulled through the diaphragm moving down and thus extended.

However, the improper breathing also have negative effects on our organism. The most common respiratory failure are due to the following causes:

These three factors have often great effects on respiration. So breathing is often shallow, and it stunted the finest capillaries in the lungs. The consequence is a lower oxygen uptake. The heart needs more beats per minute to perform better even at rest. The overall performance decreases.

Also back pain can have large effects on respiration. From reflective and self-protection, the deep inhalation is prohibited. As unpleasant pain can be avoided. However, the performance is also so reduced.

Breathing is a reflection of the soul

Breathing is also subconsciously influenced by external influences or our state of mind. To get a total harmonious breathing and a better appreciation of life you should always listen to yourself. Also meditation exercises such as yoga or meditation can lead to better breathing and are under Thai boxing and MMA fighters very popular.

Breathing exercises before training and in everyday life:

Deep breathing to stimulate and relieve the internal organs:

The deep breathing can work wonders in stressful situations in everyday life. But even before a fight or training it can help prepare for the challenges ahead, and to provide the organs optimally with oxygen.

How you breathe deeply:

Stand or sit in upright position. Let your arms hang loose and relaxed while laterally. Breathe now deep and strong through your nose. You should breathe deeply so that the air passes into the stomach and chest. Then you breathe out slowly through your mouth.

Correct breathing is for example in Tae Kwon Do or Karate training an important part of the workout. But in Muay Thai or other martial arts the right breathing technique is a great advantage. So you should always exhale forcefully in rhythm with your punches and kicks. Therefore, you can hear the most of the fighters always loud moaning or crying during the workout or fight. This helps to put the power completely in the punch.

A training wisdom: “If you do not hear yourself breathing, you may not even breathe too!”