Thailand prison fights: For some time the infamous prison fights in Thailand have caused a stir in the media. It was not always this favorable coverage. Muay Thai World reports on the struggle for freedom in Thai prisons.

The fight for freedom in Khlong Phai jail, Thailand 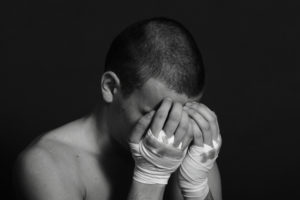 It is Friday. Fight day in the infamous Khlong Phai prison near Bangkok. The inmates get ready for one of the strangest Muay Thai tournaments in Asia if not around the world. Their opponents: Foreign Amateur Thai boxers from Iran, Australia, USA and many other countries. While they participate in order to prove something to their selves, it’s for the prisoners only about one thing: The freedom and a better life. Quite a few sit for murder from life imprisonment, which can be converted by a good combat record in a 5-6 year sentence.

The event is simple called “Prison Fights” and was founded by an independent organization in 2013. Together with the “Thailand Department of Corrections” there are regularly fights in hopelessly overcrowded prisons throughout Thailand. Selected inmates have the chance of an early release from prison. The easy way out? Elbows, knees, kicks, kicks and fists! Many a battles are so fierce and brutal that the seriousness of the stake is immediately clear.

Who draws attention to itself by good management, is encouraged and given the opportunity in to train Muay Thai in prison and fight for his freedom. After several victories, the prisoner will be granted freedom. In addition to violent criminals and drug dealers also murderers and rapists have the possibility to fight for their freedom.

But the idea is far from new. Because since 1767 the long tradition of prison fights in Thailand is maintained. As the legend tells, the ultimate Thai Boxing Champion Nai Khanomtom was captured during the battle for Ayutthaya, the former capital of Thailand. In Burmese captivity the Muay Thai fighters had to compete against the best Burmese boxers. Nai Khanomtom was fighting in the jail good enough, that he could win the attention of Burmese king. After a winning streak against 10 of the best Burmese fighters he finally freedom was granted.

About the “Prison Fight” organization in Thailand

The “Prison Fight Organization” describes itself as a charity organization and organizes the fights as a charity event. According to statements by the responsible the fighters get a fair chance to be released earlier and win a small bonus on every fight that are available as seed money after release. In addition, each participant will receive access to sports equipment and training rooms to prepare for the fight. Even after laid off, the fighters will not be forsaken. A return to a life of crime can be prevented by a Thai-boxing career. Each fighter has the chance of a fighter-contract in freedom. If he so wishes. The foreign boxers also get starting salaries in the range of several hundred USD, and usually occur on only one reason: they want to overcome their baser instincts and prove themselves.

Their stake is not as high as that of the prisoners by far. But that’s the business with the freedom.