Almost every Muay Thai fighter wears it. Without the Mongkol many fighters do not enter the ring. What is going on with Mongkon (Mongkol), and why the headband for traditional fighters is so important, you will learn here.

Why wear a Muay Thai fighters the Mongkol? 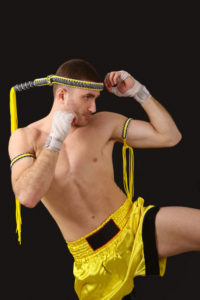 The Mongkol is a blessed headband and thus a talisman. It is worn during the Wai Khru ceremony in the ring. For the fight it is however not worn. The coach of each fighter takes the Mongkol from the head and hangs it in the corner. This brings the fighters luck and protects him from possible dangers. So the mogkol is a highly spiritual object in Muay Thai.

The importance of the Mongkon for the fighters:

Traditionally, fighters receive their Mongkon from the coach when they trained hard enough and are ready to represent the Muay Thai Camp in the ring with honor. The coach must be fully convinced of the skills of his Muay Thai student. Fighters wear the Mongkon also for paying respect to the coach, the Muay Thai school, and the sport itself. In addition, so that the gratitude and solidarity to all people is expressed, which accompanied the fighters on the difficult path to the fight.

For women it was long time forbidden to wear a Mongkol, as this will bring bad luck. Meanwhile, however, some Muay Thai schools and trainers have abandoned these views and also allow their female students to wear a Mongkol in the ring.

The right way to deal with the Mongkon:

The student should never take or putting on the Mongkon itself from the head. Only the coach is authorized to handle the Mongkol. He alone is also responsible for the storage of the Mongkol between the fights. On the day of competition the trainer will present the Mongkon at the right time.

The Mongkon should always be worn above the belt line and must never touch the floor. If the Mongkon touches the ground, it loses his magical powers and this brings bad luck.

The consecration of the Mongkon:

The Mongkon is awarded by a consecration to the spiritual force that is said to it. The ceremony can be performed both by a Buddhist monk or a Muslim Imam. Usually the coaches and the fighters themselves take part to this consecration. Just taking part in such a ceremony, the self-consciousness of the Fighter is often strengthened, which can have a positive effect in combat. Even fighters who do not live the teachings of Buddhism may participate in the ceremony and be protected.

The history of Mongkol in earlier times:

At times of war Thailand’s soldiers wore before battle always headbands as a talisman. Not infrequently ornate amulets or clothes or hair of beloved persons were attached to the Mongkol too. This should protect the soldiers from harm and bring happiness. Since the art of Muay Thai is closely connected with the history of the country, this rite was maintained up to the present time and is almost unchanged till today.

What is a Mongkon made of?

These days, the Muay Thai headbands are made from ropes, ribbons and silk materials.

Consecration Video of a Mongkon